Stow’s first settler was Matthew Boon, who established a farm in 1660 near Boon Pond – today, the much-enlarged Lake Boon. Legend has it that Boon acquired his land by trading a jackknife to the Nipmuc Indians, who had occupied the region for many years. A second family, John and Elizabeth Kettell, settled on the western side of today’s Stow a few years later. Other farmers were eyeing the land, obtaining a grant from Massachusetts Bay Colony for a settlement known as Pompositticut Plantation (Pompositticut is an Indian word said to mean “land of many hills”).

That settlement was delayed by the outbreak of King Philip’s War in 1675-76. Many settlers fled to safety in other communities. Matthew Boon, his son and a friend were killed by Indians returning to his farm for supplies. Elizabeth Kettell was captured by Indians after evacuating to a garrisoned house in Lancaster, to be ransomed back safely several months later.
King Philip’s War was bloody and vicious for both sides. By far, the Indians suffered the most. One in seven Indians were killed, compared to one in 65 colonists. Once it was over, the colonial government pursued a policy of executing Indians implicated in killings and selling many more into slavery. By 1700, the region was largely cleared of Native Americans.
Pompositticut Plantation’s first “proprietors” were primarily farmers from Concord and Sudbury – finding additional land to support large families was always an issue.
The community was chartered as a town in 1683, named by Governor Simon Bradstreet. He selected “Stow” from a list of “comely English names” – and was drawn to it, it’s said, by the fact that he once had a friend named John Stow. John Stow otherwise had nothing to do with the town, although a descendant, Stephen Stow, moved to the town in 1756. Some of his descendants still live in the town, although none are named Stow.
The original community was centered on the area now called Lower Village, near the present-day Stow Shopping Center. Like all New England communities, the village was built around a Common, where livestock grazed and the militia trained. A Meeting House and cemetery were adjacent.
But as more families moved into Stow and settled to the west, the center of population shifted. The new center became known as Upper Village, the original as Lower Village. Similarly, the Commons became Upper Common and Lower Common, the graveyard the Lower Village Cemetery.
A new, larger Meeting House near Pilot Grove Hill replaced the original in 1714 – with Hillside Cemetery established nearby. The new Meeting House was replaced by a still-larger Third Meeting House in 1755. A larger, more elegant Fourth Meeting House replaced that, on the Upper Common, in 1827.

Lower Common- The Lower Common was Stow’s original center, where livestock grazed and the militia trained. The Stow Minutemen assembled here to begin their march to Concord in the early hours of April 19th, 1775. 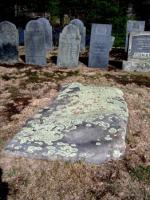 The Regicide’s Grave- This grave in the Lower Village Cemetery is believed to be the burying spot of William Goffe, “Stow’s Regicide.” Goff was one of the generals in Oliver Cromwell’s army in England who signed the death warrant for King Charles I in 1649. With the restoration of the monarchy in 1660, his life in peril, he fled to New England. A man identified as “John Green” subsequently appeared in Stow (one clue that he was Goffe: Goffe’s sister was married to one of the town’s original proprietors) and lived out his life operating a small business. “Green” asked that he be buried in an unmarked grave under an immense slab to prevent his body from being disturbed. When researchers opened the grave in the 1930s, they found a skeleton with the head and hands missing – presumably taken as proof for the £50 bounty on his head.

Samuel Gates House- Built in the new Upper Village area in the 1730s, the Samuel Gates House was a typical colonial farmhouse, with a large central chimney serving fireplaces in multiple rooms, a center entrance and symmetrically placed windows. In the 19th Century, the Town Hall was built across the street.